Recently, Eugene, his family and I went to Krabi and we went to Ao Nang Night Market. Without a doubt, we had some of the best plus cheapest food we’ve had in the entire Krabi, and I can’t wait to share it with everyone. 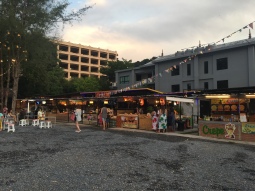 One thing we noticed about the Night Market is that every stall was specialising in different dishes. This meant that there was no competition going around to find ‘which was the best Phad Thai stall’ or whatsoever. 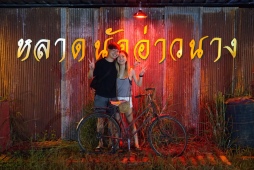 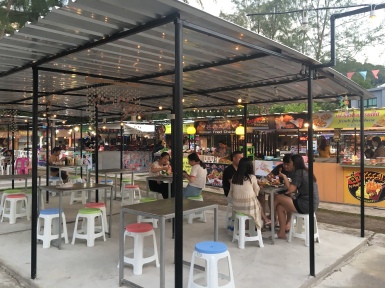 Let’s get started with the food!

You need to try the Phad Thai at the Night Market. It is fried upon every order and I was pretty amazed by how the chef was a boy that was definitely younger than me. They had Chicken (THB 60), Seafood (THB 80), Shrimp (THB 70) and Vegetarian (THB 50) options, and I went for the chicken one. At the stall, they even let you help yourselves to the condiments like peanut, sugar and chilli flakes. Please DON’T hold back on the sugar because it makes such a difference in the taste of the Phad Thai.

Another must-try was the BBQ food they have here. Again, all of these are from different stalls but all taste amazing in their different ways. The Ribs here were so juicy and flavourful and were even better than the Ribs we had at the hotel we stayed in. Just look at the char on it and imagine it falling off the bone when you take a bite of it.
I came back the next night to have the Pork Neck here again because it was just that good and the lady gave such generous portions of it, making it so worth it for the price.

The stall that sold this Corn on a Cob had many other BBQ items too but I just wanted to try the corn. This was the only thing I was rather disappointed about as the corn itself wasn’t sweet, so the taste of the corn only came from the butter and salt rubbed on it.

One of the items here that really impressed us was the Salt Baked Fish. They literally made this at their stalls, out in the open, and was still the most tender fish I’ve ever had. Once we peeled open the salt crust, the steam just started rising and we dived straight into the meat. The fish just fell off the bone and it was just so satisfying watching this unfold in front of us and for the price, it is impossible to get this anywhere else. However, I gotta say it was quite bland (for me) but they did provide spicy and sour sauces at the side.

We definitely had to try the Thai Milk Tea here but wow it felt like I was drinking flavoured condensed milk. Though, I wasn’t really surprised because I watched the guy make the milk tea and it was probably 70% condensed milk and 30% tea (or maybe even more condensed milk). If you don’t want diabetes, remember to ask them for less condensed milk.
The good side of this was that the guy who made this actually did the tea pulling. I was pretty relieved that it wasn’t like some stalls (like in Singapore ahem) that just put colouring in to make it look like Thai Milk Tea (and taste terrible). 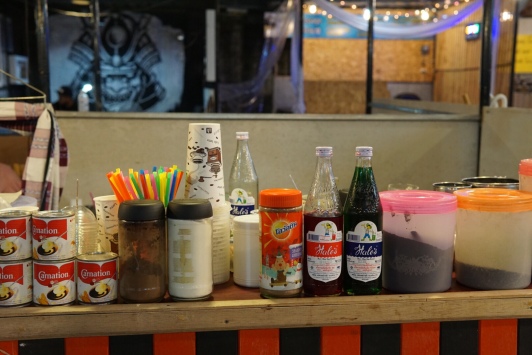 The same stall, right beside this Thai Milk Tea stall, makes the best Rotis (Thai Pancake) ever. We tried 2 types, the Peanut Butter (THB 40) and the Egg (THB 30) and omg we fell in love with both at first bite.

The Peanut Butter Roti was simply a crispy and thin roti prata, with peanut butter smeared on top. It was so simple but so addictive, I wish I knew how to make it because I’m craving for one so badly. 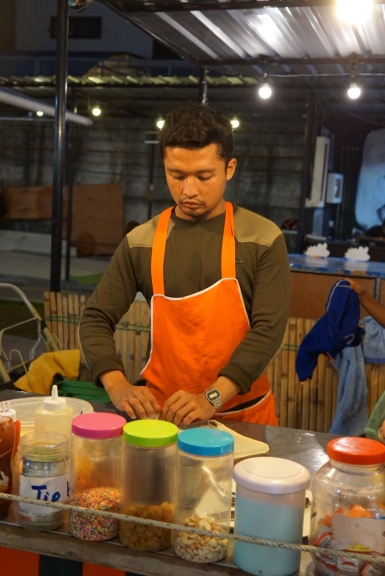 The Egg one was the one that surprised us with how good it was. This was slightly different as the egg was cracked into the roti, making it a soft roti (instead of crispy). He then drizzled condensed milk on top and I cringed a little because I thought a savoury egg prata and condensed milk definitely will not go together. BUT I WAS SO WRONG. That was one of the oddest but best combinations ever.

This night market was one of the best experiences we had in Krabi and I really hope that you guys pay it a visit and support the locals there. Do give them a word of encouragement if you visit and really like their food!

2 thoughts on “What to eat at Ao Nang Night Market”