This cafe was tucked in the corner of a building, which suited its mysterious theme so well. From the outside, it had such a mystical vibe to it and as we entered, we were greeted with so many interesting decorations. They had costumes for you to put on and potion bottles. 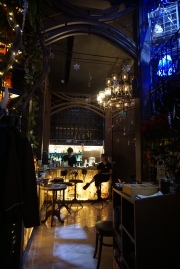 The first dessert I recommend you to try would be the Inferno Mountain (THB480/S$20.20). Not only was this dessert massive, but it also took me through the most jaw-dropping experience. First, a red liquid mimicking lava was poured at the tip of the chocolate mountain. It was then followed by a flaming Cointreau, which melted the chocolate layer and revealed 3 scoops of ice-cream that we choose and a brownie inside.
We choose the Chocolate Peanut Butter, Dwarf Iron Beer, and Ocean Twist as our 3 ice cream choices. As this dessert is pretty heavy with chocolate already (chocolate mountain and chocolate brownie), I suggest you choose the lighter options like the sorbets they have. If you like beer, the Dwarf Iron Beer was a sorbet made of beer which was really interesting and the Ocean Twist was a sour-ish sorbet which was our favourite. 2 of us could not finish this dessert alone so I suggest you share this with more people so that you can try the other desserts too! 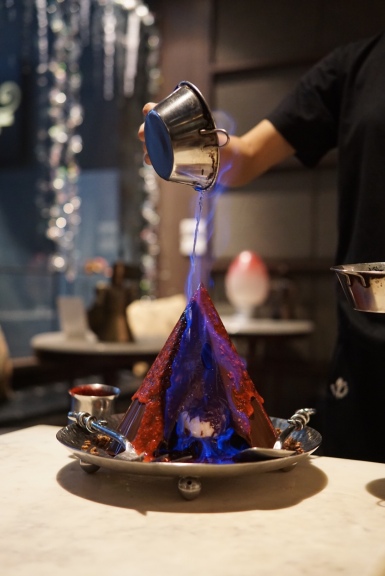 Be prepared for this dessert when it comes because everything happened so quickly and it was so amazing to watch! The Dragon’s Fire Breath (THB420/S$17.80) was presented in a ball of cotton candy in which afterwards a cup of alcohol was poured on it before bursting into sparks. After the cotton candy melted, it revealed the Banoffee Tart with Milk Ice Cream. It was a really sweet treat but the bitterness from the alcohol helped to balance it out a bit. If you are choosing between this or the Inferno Mountain, I recommend this one as I like the banoffee tart more than the brownie and this was more manageable to finish. 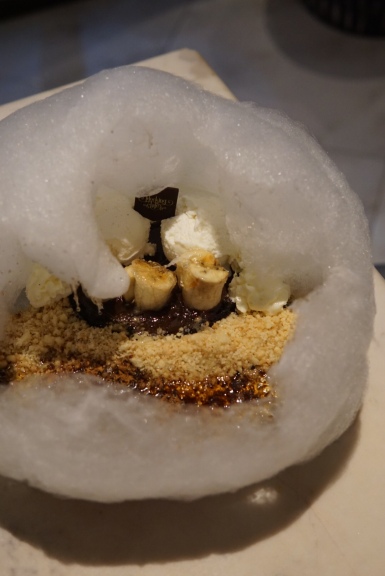 Moving on to drinks, we really liked this mocktail – the Mermaid Tears (THB420/S$17.70) had a base gin with Midori liquor and melon syrup. I am not a fan of melon but it actually all went really well together and I recommend you try it too. Prepare your cameras or phones for this drink because it will be served in a glass bottle and poured into a cup, and smoke will start flowing out from the cup. Really impressive!

This drink caught our eye and we had to order it. The Hell Horn (THB420/$17.70) had dark rum, gallano, caramel and baileys in it. As you can imagine from the looks of it, it was a really heavy drink and though it wasn’t to our liking, those who love sweet and creamy-like mocktails would love this. It was served in a cup in the shape of a horn which was so cool and a side of popping candy.